For some few students at Ambassador College in Pasadena, California, life had some strange and sometimes dangerous twists and turns.

The college as well as the church seemed to be a magnet that drew some very odd personalities.

Without a doubt, many of the incoming freshmen students were highly intelligent. However, there were always those that were socially awkward and inept (I am not being judgmental, but presenting an honest appraisal).

This lack of social graces was primarily due to their Worldwide Church of God upbringing. They were bi-products of the churches strict policy of non-involvement in worldly social activities. Opportunities to become involved with social groups like the Boy Scouts or Girl Scouts was not acceptable to the church. In addition, the church’s ministry discouraged students from getting involved in school activities such as dances; even participation in sports was discouraged. Is it any wonder that church kids grew up in a fantasy world? When reality struck home, they found it difficult to function in the real world.

Most students came to Ambassador College because they had a heart for serving God’s people (at least at first). They wanted to be a part of a college and church that represented the greatest work that God was doing in the end time world. This is what the ministry instructed them, this is what they (wanted to) believe.

Who wouldn’t want to be a part of such a wondrous and wonderful work?….The only problem was that it was not true! Still they came by the thousands.

The following is just one of those awkward and dangerous situations where poor, no, bad judgment stirred up a hornet nest and almost caused an international incident.

In a male dominated church and college, it was important for the men to become the best and most effective speakers and leaders possible. This was an admirable goal. They (the students) believed they were the future of the church and college. They were. They mistakenly thought they were the solution, and the future for all mankind. This in itself was a dangerous delusion.

It was important for every man to develop and fine-tune their speaking skills. Part of the regiment included practicing for hours on end doing vocal exercises, and standing in front of a mirror refining facial expressions with hand and body gestures. This system proved to work well, very well. For by graduation most of the men developed into charismatic leaders and very capable speakers. They developed and fine-tuned all the mechanical skills of speaking.  Although, in all too many cases they lacked the heart and substance that true leaders must have.

Now, one of the requirements for all male students was to take a speech class; nothing unusual here. Its purpose was to develop the whole man, not just his speaking ability. This class included a series of speech assignments. One assignments for the class was to present a speech based upon a personal and ‘unusual experience’. However, one student that lived a very sheltered and uneventful life did not have a single unusual or interesting experience to share. His life to that point in time was flat-out dull and uneventful. He was the epitome of the life of a social misfit, which added to the pressure for him to produce and meet the college’s standard of excellence. As a result, this drove him into a quest. He turned this desperate need for acceptance and perfection by his peers into a twisted, weird, and dangerous direction.

Of all things, he came up with what he thought was an incredible idea for doing a speech. It would be about the legal process and emotional stress of going through a divorce. Now that presented a problem because the speech must be from personal experience. Since he had never been married, let alone divorced, it was a most unlikely topic for the speech. However, being a good and creative AC student he soon came up with what he thought was the perfect solution. Indeed, it was both creative and ingenious. Somehow, and God only knows, he managed to talk a sympathetic and understanding, but very naive co-ed into becoming a participant in his speech project. She was a beautiful and intelligent young woman, a freshman and a bit on the shy side. So when he poured on the charm, she became enthralled with his magnetism. Guided by her immature and irrational emotionalism, she allowed him to talk her into helping him.

It all started one early Monday morning, about 6 AM, the two of them embarked on a journey into the Twilight Zone of a bizarre and wacky adventure. This mystical journey led them to Tijuana, Mexico. There, for the experience, his plan was for them to file for a divorce in a Mexican court. It was a crazy but interesting plan!

The male student was well on his way to getting first hand experience on the divorce proceedings. However, he faced an immediate legal problem. He and this lovely co-ed were not married. That is right; he talked a co-ed into traveling with him into Mexico, a foreign country and once there to file for a divorce. This was just short of insanity. They were about to enter into an absolute nightmare involving lies and fraud, which in Mexico is a capital crime.

It did not take long before the events really heated up and started to get complicated. The two young students found themselves facing an unforeseen disaster in the making. The young woman, realizing what a horrible mistake she was making, burst into tears before the judge. She openly admitted to the pretense and the fraud she was about to enter into. The judge was not a bit sympatric, you might say he was outraged that two stupid Gringos’ would conspire to openly and willingly commit fraud and make a mockery of Mexico’s judicial system. He became agitated which turned into indignant anger.

The students were in trouble, serious trouble! The consequences of their stupidity could easily have resulted in a 5-year sentence in a Mexican prison. Both of them were

now scared, just short of being terrified, and with good reason. What was a seemingly fun project suddenly turned into a very frightening and unimaginably terrifying nightmare! Regardless of their sincerity and stupidity, they were not innocent in the eyes of the Mexican court system. They were in deep doo-doo, up to their eyeballs! Their situation was about to escalate and get worse, much worse!

Once the judge discovered the fraud; in spite of the tearful cries of the duped co-ed, the judge immediately had the two handcuffed and thrown into jail. They were not given an opportunity to post bond; they were not given a trial date. They were given no access to legal counsel, there was no mercy or compassion; their crime was contemptuous.

Fortunately and unbelievably, they were allowed, (actually this was nothing short of a miracle), one phone call. At least the young man still had enough of his wits about him to use that one, three-minute call, to call for help from the college. Within a short time, the information about their plight reached the office of Herbert Armstrong’s administrative team. Once the college verified the student’s situation, they took immediate action to avoid further embarrassment and involvement of the church and college. It was too late, they were now unwillingly involved in a potential international fraudulent scheme.

It was no easy task; it took the legal staff some serious phone calls to the churches powerful connections within the Mexican government. Understandably, no one in the government wanted to get involved in this politically dangerous and charged situation. The legal office of the church, in Mexico City, worked tirelessly to obtain the freeing of the two students that were now facing 5 years of hard time in a Mexican prison. The nightmare just kept getting worse. 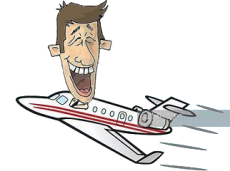 After what seemed like endless phone calls, discussions and heated arguments, the church officials were losing the argument and battle for the student’s freedom. The church and its legal staff continued to put some serious pressure on the politically emotional situation.  After almost two weeks of negotiations the church officials flew, on the Herbert’s private jet, to Tijuana, Mexico. After paying an undisclosed serious amount of money in fines, penalties, and excessive administrative expenses, (bribes), they obtained the custody of the two frightened students.

Once back to the safety of the Pasadena campus, the male student now had plenty to talk about regarding his real life experience. He even managed to get the “Most Effective” speech award for his “Unusual Experience”.

He never did make it into the ministry, not even close! Shortly after his return to Pasadena, the Dean of Students summoned him to his office. There he was politely but firmly dismissed from the college and asked to immediately vacate the premises and leave the college campus. The Dean then called for the two security guards that were waiting in the lobby. They immediately escorted the student back to his dorm to pack his belongings; they walked him to his car where he drove off in humiliation and disgrace.

What happened to the young woman? She learned firsthand about stupidity and the cost of her naivety. It was a hard, humiliating and maturing experience for her. She did go on to graduate with honors. Shortly after graduation, she married into the ministerial hierarchy. The church and college sent the two to pastor a congregation in a prominent city….his reward for taking 4 years of abuse (loving correction)….now it was his turn to dish it out to others.

Life on campus at times bordered on insanity, but it was never dull.

Legalism is a death trap designed to keep you captive and in constant turmoil. This is a dangerous and emotionally destructive place to be. In the church, this leads to nothing short of a life of oppression and despair. It robbed the members, or students of their individuality and personality. It derailed their hopes and dreams.

The good news is there is real freedom in and through Christ our Lord. In Him, there is no oppression, humiliation or despair. Now that is really cool!

He did it all, and paid it all so you do not have to live a life of hopelessness, or live under tyranny. When you come to realize and truly understand what and how Christ paid for your freedom, it will leave you speechless, and free with a deep sense of awe and real hope! You will discover, He offers a life of joy and peace today; and a future that is so awesome there are no words that can even come close to describe what is yet ahead.

That should put a big smile on your face and a joyful song in your heart.