It was mid September and traditionally every fall Ambassador College treated its small student body to a 2-day stay at Sequoia National Park.

This year was no different, well not exactly, as you will soon discover. It was not that the trip itself was any different from those of previous years but what happened during their stay was bizarre and dangerous.

The two college owned buses left shortly after breakfast and arrived at the park later that day. As they journeyed the students sang and laughed together as they shared humorous stories. It was a special and unique time where lifelong friendships began to form.

These yearly excursions were always an exciting time for the students. They all looked forward to several days’ filled with adventure and discovery. This was especially true for some of freshman students that had grown up in the inner city. For them it would be a fascinating quest into the unknown beauty found in a California national park.

During the day, their activities included hiking, picnicking and various avenues of exploration. As evening approached, they all gathered around a large campfire roasting hot dogs and marshmallows. The celebration went well into the evening under the canopy of a star lit night. It was a perfect time for singing songs about faith and courage. Then there were of course the stories, scary stories of monsters and beasts the lurked in the nearby forest. It was a wonderful time to be young and free.

However, the park was not without its dangers. One of the biggest was occasionally a bear would wander into a camp. The Rangers would emphatically warn all new visitors not to feed the bears. All too often, their request was ignored. The results were that some campers faced a very dangerous situation. In one incident, a bear mauled a camper as he tried to feed it. This left permanent scars, and a reminder that there is a price to pay for foolish judgment.

The rangers kept busy educating and protecting the new visitors from dangerous encounters with the wildlife. This protection sometimes required that they hunt down any animal that presented a real and eminent threat to the parks guest. Whenever possible they would relocate the animal to a safer location. However occasionally it was necessary to use deadly force; this was always a last resort.

The fearless and all too often naïve students were really enjoying themselves. All was going along just fine, until one day late in the afternoon towards sunset…

It all started when a trained park wildlife observer alerted the rangers that, a bear had 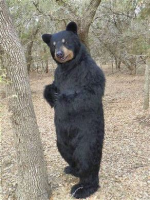 gone rouge, and it was several miles to the north. The observer additionally reported it was moving in the direction toward the campers…

Three coeds were out for a evening walk. The full moon provided plenty of light along their path. Then it happened, out of nowhere a bear appeared. Now standing on it hind legs as it moved towards them, dangerously close. The women ran for their lives as it chased them back to camp. They were scared and shaken beyond words, almost hysterical about their dangerous encounter.

The senior student in charge of the group immediately alerted the rangers to the near attack. It was now their fear that the rogue bear was in the vicinity and posed are serious danger to the campers.  This called for immediate action. So they quietly set up a plan to contain the situation before any serious damage to the campers took place. To avoid a panic, they very discreetly, advised the campers to stay close to camp and not to wander off until they neutralized the threat.

The hunting party consisted of a group of experienced trappers and hunters. These men were highly trained experts, and well equipped to handle any hostile encounter with the bear. Their plan called for tranquilizing the bear if possible; however, they did not rule out the use of lethal force.

This situation became more intense when a bear chased a second group of students. This created an atmosphere of serious concern and tension. 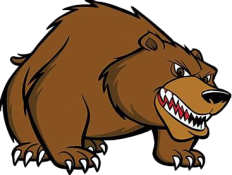 The last thing the rangers wanted was a student mauled or killed by the bear. Therefore, they quietly intensified their search.

It was towards late afternoon when one of the rangers discovered fresh tracks, but these tracks did not look right. There was something distinctly odd about their appearance. They thought that perhaps this was due to an unusual wound. After all, it was a rogue bear, and the wound might have caused its anger.

The fresh tracks were only 200 yards from where the students were going to gather later that evening for a sing-a-long around the campfire. The rangers concern became intensified; there was an air of urgency among the men. It was obvious that this problem with the bear needed to be resolved, and right now.

They quickly went into action, and began cautiously tracking, knowing all to well the potential danger they faced, they were putting their lives at risk to protect the campers. If they did not bring down the creature on the first shot, it would provoke a raging charge and vicious attack by the injured animal. Therefore, they proceeded with a great deal of caution. Then one of the men spotted it in a wooded area. He alerted the other men to close in.

Since it was so close to the where the campers were, the head ranger gave the order to use deadly force to neutralize the threat. In a systematic manner, they moved in for the kill. Knowing they would only have one shot to bring the beast down, they picked their best sharpshooter for the job. The other men would move in and provide a slight distraction while the shooter took position to take the bear down.

He had the bear in the crosshairs of his scope and was getting ready to fire the fatal shot. Then something strange caught his eye, the shooter hesitated, for a split second, he thought to himself, something is just not right here! He checked the bear over very carefully through his scope on the rifle…he felt an icy cold chill of horror come over him. He now knew why this bear and its tracks were differently odd. Almost in a panic, he desperately radioed the rangers to stand down!

He lowered his rifle and approached the bear from behind…was he being brave, foolish

or just plain stupid? He caught the bear completely off guard and by surprise. Wrestling it to the ground he ripped its head off….Of all things, it turned out the rogue bear was nothing more than a foolish Ambassador College freshman dressed up in a realistic bear suit to scare his fellow students. His stupidity brought him within a heartbeat of a violent death!

He owed his life to the quick thinking and a moment of hesitation of the shooter. If he had not hesitated for that split second, that college student would be dead and this story would have a far different ending!

For the moment, the student was safe. However, the Rangers wanted to lynch him as an example of stupidity, not that they would have, but they sure wanted to! Who could blame them? They immediately took him into custody and placed him in detention until the local sheriff arrived. Without a doubt, this reckless and foolish student was going to cost the student some hefty fines and serious time in jail.

Fortunately for him the college officials from Pasadena intervened and after paying thousands in fines, the rangers released him into their custody.

For the student, his biggest experience in terror was yet ahead of him. When he returned to the campus the college’s security team met him as he disembarked from the college’s bus. They escorted him directly to the Dean’s office.

What happened to the student? Did he survive the wrath of the Dean?  Someone reported hearing loud yelling coming from his office…to be perfectly honest; I do not remember the rest of the story or what happened. You will just have to use your own imaginations. However, keep in mind that mercy and compassion were not among the virtues of either church or college administrators. Their judgments were often times harsh and ruthless.

Life on campus was full of thrills and chills. Sometimes the situations were downright frightening and extremely dangerous.

We all do foolish things but unlike that of the student, our lives are not in the hands or at the mercy of men.  The penalty that once hung over our heads was death with no hope of reprieve. The good news is that Jesus paid that debt for us. He died in our place so we could live. When He rose that third day from the tomb He gave us His life, eternal life. We are now free of all penalties, we are now possessors of the assurance that we will spend and enjoy eternity with Him. Now that is worth celebrating! This is His gift, are you willing to accept it? Are you ready to embark on the most wondrous journey of your life?