The committee consisted of well-recognized and accomplished scientist and arborists; they were on the campus to give us their final verdict, what they said was shocking and astounding.….

After the fish fertilizer incident, see “Big Stink On Campus” was over;  I was extremely pleased, as you can imagine to be free from that horrible, smelly and unproductive job.

I really suspect my boss knew something was fishy about the whole incident but he could never verify the truth about what I did.

A unique and serious problem developed on campus; the Deodar Cedar trees were dying. The campus had already lost 3 of these majestic giants that were at that time almost 80 years old and more than 40 feet tall. Several more showed sings of diminishing health; needles that were normally green were turning brown.

The investigation of what was causing the problem started by taking some soil samples in the affected areas and sending them to a specialty lab for analysis. In addition, the college’s chief arborist physically removed most of the infection in several trees by using some creative tree surgery, a job well done. The surgery revealed that it was Armillaria Root Rot fungus.

In short, this fungus destroys the Cambium layer between the bark and heartwood of the

tree. This is where nutrients flow from the roots to the outer most branches. Once destroyed, the tree is no longer able to move and absorb the necessary nutrients, so it slowly dies over a period of several years.

eminent, but they also confirmed our proposed approach, more about that shortly, was doomed to failure, as were the trees.

We just were not sure we were willing to accept their appraisal of “no workable solution”. Personally, I just wondered what would cause such a problem in the first place and how those circumstances could be reversed if possible. Intellectually I could not come close to their knowledge base, understanding and experience. However, I did have one thing in my favor, my mind was not cluttered with academic, and sometimes limiting knowledge.

The following is what we discovered and the course of action we put into place, which resulted in….getting a bit ahead of the story, so back to the sequence of events.

First upon close investigation, came the discovery that the needles of the tree had a very thick layer of oily substances, which turned out to be the residue from the smog. This layer of goo was preventing the trees from effectively processing carbon monoxide into oxygen. This alone was slowly suffocating the trees.

The first part of the program was to have the tree crew washed the trees down with a mildly organic soapy solution to dissolve the oil. They used a 300-gallon high-pressure truck mounted tank and pump, (the same one I used to spray the fish fertilizer…with a

newly repaired hose) this removed the goo from the needles; the trees responded with some new lush growth.

However, while the trees did breathe more efficiently, we simply removed the contaminants from the tree to the surrounding ground. It was not long before they began to revert to signs of returning to stunted growth. Our celebration of success was just a little premature. While we solved one problem, we inadvertently created another. The fungus seemed to thrive on the new source of food; the smog contaminants now in the soil.

I did some research and discovered an article about a group of scientists using bacteria to eat the oil from a spill that threatened a local ocean environment. The treatment was an interesting and practical success. A committee of intellectual giants cited it as being unorthodox. As it turned out, they represented another, more costly and less effective method to deal with the problem.

Upon further investigation, we discovered the soil bacteria in the affected areas were dying from the contaminants. Which when you stop and think about it, it was obvious that something like this would take place. Simply moving the contaminants from the trees to the soil actually in some respects made it worse. Now the question was what to do about this newest development.

It was obvious the trees needed a healthier flora within the soil. We faced a dilemma, was it possible to change and revitalize the soil considering the pollution dumped into its ecosystem?

All living things have one, among many, items in common; all need a balance of various elements and minerals to, not to just sustain life, but to develop a healthy living system. Soil tests showed that the minerals and other elements were abundantly there. However, the various chemicals found in the smog chemically changed the nutrients into an insoluble form, the trees simply could not access what they needed to thrive and heal themselves from the fungus.

Therefore, based on discovery I suggested to our team a very unorthodox solution.

Simply, we used a 500-gallon vat of water added 50 lbs of blood meal (excellent source of nitrogen), 25lbs of Sea Kelp (high concentrate of minerals and soluble trace elements). Everything was there that the trees needed, yet it was still in an unusable and locked up. How to break it down so the trees could absorb the nutrients was the big question. The answer was quite simple; we added about 5lbs of compost. Now compost is full of microbes and bacteria whose function was to break down these compounds and converted it into a usable form. They did their job well! It took about 10 days for the microbes to complete the conversion process. Now all the elements were readily available in a water-soluble form.

The process of the conversion started out with a ph of 3.0, very acidic and unusable as a quality source of food for the trees. However, once the ph rose to 7.2, which is just slightly above a neutral, we knew it was now in a state that the trees could use. An almost perfect  balance between acid and basic.

Within less than a week after the first application of our new concoction, new needles 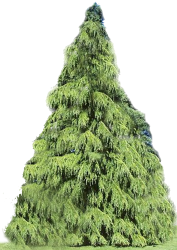 began to form; within three months, the trees showed signs of moving towards full recovery. Soil testing showed that the fungus was slowly dying back. It was nothing short of a miracle! Successful at last!

The recovery of the Deodar Cedar trees drew the attention of the original group of scientist and arborists. They returned to the campus to see for themselves this strange and unexpected turn of events. They looked, they studied, they took soil samples, and rubbing their chins in unbelief, they took a sample of the new brew of the “wee-beasties” (as we liked to refer to them) for chemical analysis. Getting them to investigate further, even though they were bewildered was awesome…so far so good!

Their analysis took about six weeks. Shortly after it was completed, the college staff arranged for another meeting to discuss their findings. Very cool indeed…or was it?

The head scientist, after a brief and detailed presentation about the extensive processes they used and the results obtained came to this unexpected conclusion. He said the material the college used “wee-beasties” is a living organic material. Its very nature limited their ability for a successful analysis. He went on to explain that their attempt to analyze it had failed miserably. The living material was in a constant state of change, this change was due to the bacteria and microorganisms (wee-beasties) digesting the solution. As the material was digested, the chemical ingredients changed from day to day making it impossible for the lab to get an accurate and precise analysis. Therefore their conclusion was, (a direct quote that I remember as if it were yesterday) “Since we cannot adequately analyze the material, because it changes with each analysis; we therefore conclude that it cannot work”! Whatttt !, are you serious? The physical evidence was there for all to see, the trees were recovering, and more than that, they were thriving. Yet in spite of the physical evidence and the positive soil analysis, they denied the fact the trees were in a state of recovery.

Nonetheless, the program continued and the trees continually improved until…About a year later, Barbara and I decided to leave the college and move to Eugene, Oregon. The new program manager decided the program was too simple to work and discontinued the use of the “wee-beasties”. It was shortly after that the trees once again began to show signs of stress…unfortunately the college was closed and sold to a developer; most of the trees are no long there which is really quite sad. They sacrificed many the trees to build apartments.

Life on campus and sometimes off campus was just a weird as can be….rational often times was thrown out the window for intellectual opinion, speculation and conjecture.

Ambassador College was almost totally lacking in practical wisdom, knowledge and understanding. This resulted in their choosing a path to complete and utter destruction. Today the college is gone, the church is gone the only thing that remains is a small and shallow echo of the past. The church and college instead of bringing stability and hope brought chaos, confusion and despair.

In their intellectual pursuit they, because of their pride and ignorance left Jesus and abandoned the one true path that brings stability, hope, purpose and a most amazing future that is guaranteed and sealed by His life. Because of His life, we no longer need to be afraid or overwhelmed by the crazy world we live in. And that too is awesome!

One thought on “The Fungus Among Us”